Fracking, a method of extracting oil and gas from shale rock formations has undergone considerable developments over the past decade. These developments have gone their different ways in the US and Europe respectively. We discuss shale in both areas.

What is fracking and where did it originate?
Hydraulic fracturing, also called fracking is a method of extracting oil and gas from underground shale rock. The first step is drilling, where after highly pressured water mixed with sand and chemicals is injected into the well which will cause small fractures to appear in the rock out of which the gas or oil will flow to the top of the well once the pressure is removed. The sand is needed to keep the created fractures open while the chemicals are needed for deterring bacteria and helping the water move through the cracks (Adam Vaughan, 2018). 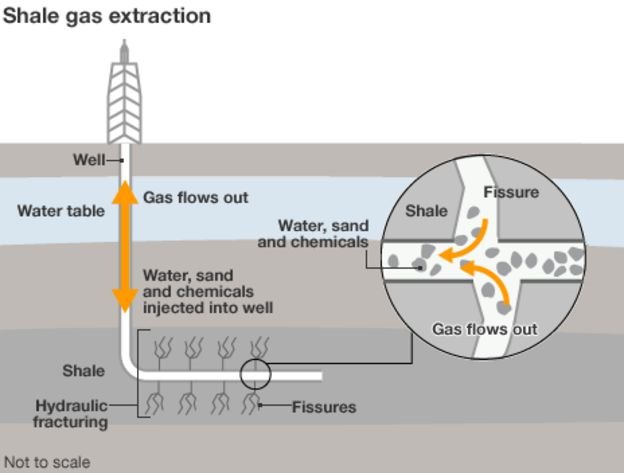 While the idea of fracking had previously been researched, it was only in the 1980s and 1990s that the idea was developed into a practical and viable method with the US being the frontrunner of the technology. To its dissatisfaction, the US has been dependent on energy imports for many years, mostly from the Middle East. The 1973 oil crisis was a particular scare which led to the implementation of a crude oil export ban and even more focus on the ambitious goal of energy independence (Bethany Mclean, 2018). Nevertheless, over time US oil imports steadily rose and eventually peaked in 2005 at 14.4 BPD.

After this peak, US oil imports declined till 2015 due to multiple factors, including a decline in consumption and, more importantly, increased domestic production of crude oil and hydrocarbon gas liquids (IEA, 2018). The ban on crude export was eventually repealed in 2015 by the Obama presidency as a result of this increased domestic energy production owing to the fracking technology which enabled the production of many unrecovered resources on US soil. After terminating the crude export ban, the US has become a crude oil exporter; recent notions of the US becoming a net crude oil exporter are incorrect however (Robert Rapier, 2018). According to IEA data, the US imported roughly 10.1 MMb/d of petroleum (not just oil) in 2017, of which 7.9 MMb/d were crude oil and 2.2 MMb/d non-crude petroleum liquids and refined petroleum products.

Reasons for why the US both imports and exports crude oil is the fact that some of the US domestic shale production is not compatible with is refineries, which is why it exports some crude (e.g. to Canada) and imports crude which can be processed by its own refineries (Robert Rapier, 2018).

Shale and its economic viability
Shale has thus gained traction in the past decade and has helped the US to majorly increase its oil and gas production from previously inaccessible resources. The high oil price after the global recession enabled the US to develop its shale industry and change the position of the US on the global energy market. This in turn has also impacted the position of traditional energy suppliers such as OPEC. For the latter, the shale boom is not a positive development as US supply poses a threat to their market share.

A difference between the conventional oil and gas and the shale method is that the latter is more capital expensive to carry out. The development phase of shale is especially costly and requires significant long-term investment, while the profits are only poised to come to the surface later. The 2014-2016 oil price war between OPEC and shale producers thus hit the shale industry hard as the oil price per barrel went down into the $20 range (Nick Cunningham, 2018). Many US shale companies went bankrupt, others had to restructure and become more cost effective to lower their break even costs. At the end of 2017 OPEC finally agreed on a production cut, where after oil prices rose again.

The more recent oil price drop towards the $50 range at the end of 2018 has again slashed investor’s hopes for a return on their investment. In this case, Trump’s tweets thanking Saudi Arabia for the low oil price was more a curse than a blessing for the domestic shale producing companies (Jennifer Hiller, 2018). Since the most recent OPEC production cut, the oil price has risen although still staying far from previous highs. Compared to 2014, however, many companies operating in the shale industry have gotten more robust and will thus be better able to deal with the current slump. On the other hand, breaking even is insufficient for profit seeking companies, and as the shale industry functions on investor capital, it is problematic when these investors are not seeing returns.

Fracking in Europe
The US fracking boom has companies eager to use this method in Europe as well. The anticipated domestic production was meant to benefit Europe by lowering the energy prices. An example of a promising country was Poland, which was reported to contain considerable shale gas reserves, and plans were made to start fracking in 2014 (Arthur Neslen, 2016). The plans were met with wide spread environmental protest however, which made it politically impossible to continue on this course; especially in combination with the oil price crisis at the time which made fracking economically unviable.

Due to political and societal environmental opposition there are more limitations to the employment of the fracking method within Europe compared to the US, for example on which chemicals are allowed to be used. The primary reason for this opposition is that fracking is widely believed to have damaging consequences on the environment. Firstly because of the chemicals that are being used in the process which could contaminate drinking water sources, as well as seismic activity which is linked to fracking. Because land owners in the US directly financially benefit from the shale gas or oil that is found on their property they are more eager to open up their land for exploration. In Europe this is not the case, which makes land owners less inclined to condone exploration in their neighborhood (Gilblom & Patel, 2016).

As a result of the political, societal and economic setbacks, the fracking method has never made its big leap in Europe and is even banned in numerous countries. France was the first to do so in 2011, since then more followed: 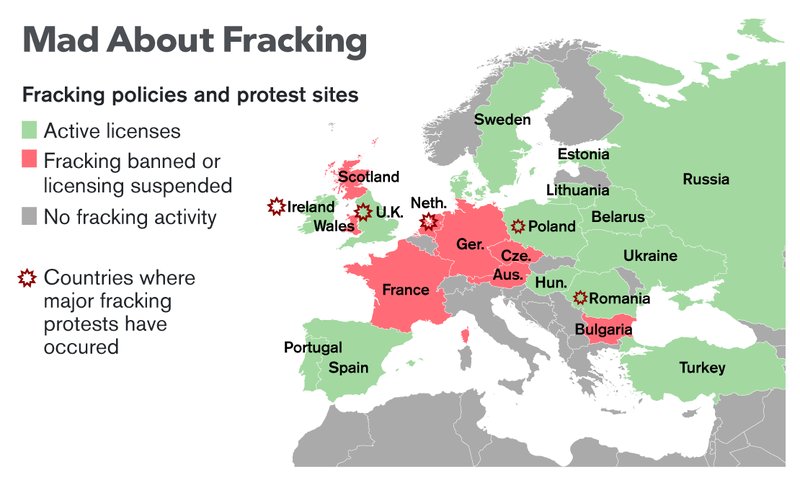 Regarding the above shown Bloomberg graphic which dates from 2016 it ought to be mentioned that Ireland banned fracking in June 2017 (Craig Bennet, 2017) and that there is currently no official fracking ban in Scotland as in June 2018 a Scottish court ruled that a legally enforceable fracking ban was never implemented by the Scottish government (BBC, 2018).

As of now, the only country truly active in the shale gas industry is the UK. There had been no fracking in the UK since 2011 as the method was linked to earthquakes in the north-western city of Lancashire where the gas was explored by Cuadrilla Resources. But the first new operation started up in October last year, this in spite of high pressured environmental protest from the local community and the local county council in Lancashire rejecting the new plans of Caudrilla to resume fracking in the area (Mahatir Pasha, 2018). The UK government overturned the local county’s decision because it sees shale gas as a viable alternative for the decreasing resources in the North Sea.

More recently, more local councils in the UK such as Manchester have reported to oppose fracking in their region, it seems questionable for Westminster to keep overruling these local decisions. Presumably as a result of facing this stark opposition the UK government decided against opening a second operation in Lancashire in February this year (BBC, 2019). Additionally, the high court of the UK has ruled on March 6 that the UK government has failed to take into account the latest evidence on fracking at the time of its decision making, which is an embarrassing outcome for Westminster. It is yet unclear how this result will influence future developments in the UK fracking industry, but it certainly does not bode well for those promoting it.

While shale oil and gas is certainly a viable method of natural resource extraction under certain legal and economic conditions, it is also believed to have a negative environmental effect and thus faces considerable opposition from European societies, governments and environmental organizations. The method has been banned already in numerous European countries, but the UK is still trying to make it work. The future outlook is bleak, however, and what turned into a boom in the US seems, at least for now, to be merely a bust on European soil.

Along with concerns about the consequences of global climate change have come initiatives to slow the process. The development of energy generation through renewable sources is one aspect, but energy efficiency has also become increasingly important…

On May 16, leader of the UK Labour party Jeremy Corbyn announced his party’s plan to (re)nationalize the UK’s water and energy…

The LNG industry is subject to continuous developments such as supply growth, global warming and technological advancements.…