Nuclear power’s first technological development in the post-WW2 years and increasing popularity during the Cold War came with fast increasing generation capacity and popularity for the sake of deterrence and prestige. The USSR was the first to generate electricity with a nuclear power plant in 1954. Besides the USSR, France and the USA played a primary role in the power plant manufacturing industry.

The disintegration of the USSR and end of the cold war had a declining effect on the development of nuclear technology in Russia. The nineties and early 21st century were marked by low investment and minimal technological development. This all changed in 2007, when the Russian government decided to create a state company under the name of Rosatom, focused on strengthening the Russian nuclear technology industry (Meliksetian, 2018). This decision was followed up with a continuous stream of capital investment by the Russian government into this state-owned company, spurring Russia back to its prominent role in the nuclear industry.

The global nuclear power industry took a hit after the March 2011 Fukushima Daiichi nuclear disaster in Japan, where an earthquake triggered a tsunami and seriously damaged the Fukushima Daiichi reactors. The disaster resulted in an immediate shutdown of approximately 10 gigawatts (GW) of nuclear electric generating capacity and put Japan back in major dependency of expensive conventional fossil fuel imports. The 2011 accident majorly damaged confidence in the nuclear power industry. Besides Japan, it also spurred Germany to move away from nuclear power generation. However, there are still advocates for its use, with Russia surpassing the USA as biggest player in the field of exporting nuclear plants.

Domestically, Russia currently has 35 operating nuclear power reactors, with a total capacity of almost 27.000 MegaWatt electric (MWe). Additionally, there are plans to manufacture up to 15 more reactors by 2030. This is in line with Russia’s Energy Strategy document which was presented in 2009. The document outlines Russia’s energy policy objectives towards 2030 and emphasizes the goal of increasing the share of nuclear energy in Russia’s energy mix; which is currently around 13%. Besides the number of power plants, the importance of technological development in the industry is stressed. More specifically, Russia focuses on modular reactors and fast reactors with a closed fuel cycle, which will allow used nuclear fuel to be processed and reused instead of being disposed of (World Nuclear Association, 2019). 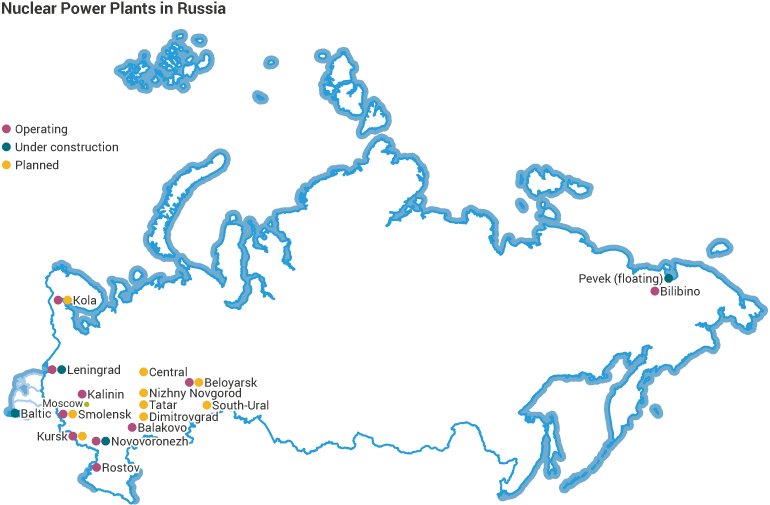 This intensified domestic construction and technological exploration leans heavily on state funding, but Rosatom has focused on earning its own income most importantly through commercial nuclear energy projects in the international market. The production and export of conventional fossil fuels has always been the most important for Russia’s economy, but nuclear goods, technology and services have been getting more and more attention. Russia has several reasons for investing in nuclear energy, relating to political and environmental arguments as well as technical and cost advantages (Merdan, 2018).

Compared to conventional fossil fuels, nuclear electricity generation is clean, producing nearly emission-free electricity. It is also more cost effective than natural gas generation, this mostly applies to nuclear plants already in operation. While the manufacturing and decommissioning of a plant is capital intensive, once these costs are ‘sunk’, plants operate at very low operation, maintenance and fuel costs (World Nuclear Association, 2018). Russia also benefits from consolidated expertise and decades of experience in all aspects of the nuclear industry, from construction and operation to decommissioning.

Despite Russia’s acclaimed domestic targets, relatively slowly increasing domestic electricity demand (889 TWh in 2017) does not require the manufacturing of many new plants at home to fulfill this demand (Enerdata, 2018). For this reason, newly domestically manufactured power plants enable Russia to export the spare capacity to the CIS region, Latvia, Lithuania, China, Poland, Turkey and Finland. Rosatom’s most important task, however, is to focus on the export of its technology abroad, which is recognized by the Russian state as an important economic driver to revitalize Russia’s domestic industry. Currently about half of Rosatom’s sales are going abroad, the goal is to increase this to two thirds by 2030 (Ogawa, 2018).

According to Rosatom’s 2017 figures, the company is manufacturing 33 power units abroad, in 12 different countries with a portfolio of international orders of 133.5 billion USD (Rosatom, 2017). This means that Russia is manufacturing 67% of the world's nuclear plant deals currently in development, which makes Rosatom the world leader in building power plants abroad, with a global market share of 60% of all nuclear power plants planned or under construction. Buyers of Russian nuclear technology include Turkey, Bangladesh, India and Hungary. Rosatom has also signed numerous nuclear energy cooperation agreements with countries of the MENA region, such as Egypt, Jordan, Algeria, the United Arab Emirates, and Kuwait. 2018 was again a successful year for Rosatom, as it signed a package of cooperative agreements with China and an October 2018 agreement on the construction of the first nuclear power plant in Uzbekistan. The plant is expected to be commissioned in 2028, manufactured by Rosatom with a soft loan of an estimated 11 billion USD provided by the Russian state (Auyezov & Nikolskaya, 2018).

While Russia has made agreements with China to cooperate in power plant construction, China is also the only one really competing with Russia on nuclear technology export. It is putting increasing efforts in the sales of its own nuclear plants, drawing from Russian and French technology and going into cooperative agreements with countries such as Thailand, Saudi Arabia and Argentina (Ogawa, 2018).

Nonetheless, Russia is on top of the game for now. Russian nuclear technology appeals to many international customers due to Rosatom offering beneficial agreements to its applicants. Besides offering attractive discounts, Rosatom provides long-term loans drawing from the Russian state budget on beneficial terms with pay back periods of over 15 years, daily management of the power plants, as well as construction and shipping of nuclear fuel (Rosatom, 2016). This makes coming to an agreement with Russia especially alluring to countries newly dabbling in nuclear technology and thus lacking expertise. It is also what sets Russia apart from the United States, which lacks the ability to offer its international customers such an all-inclusive deal as it’s competitive ability is hindered by profit goals and restrictive export laws. Russia offers its nuclear technology for an attractive price, lower than a solely profit seeking company ought to ask (Freeman, 2018). The reason for this is that Rosatom is not just market driven, but also driven by the objective of gaining political influence in the countries it operates. On one hand, nuclear power importing countries are offered an attractive deal with a long-term loan including all services; on the other hand, this also means that these countries are heavily indebted to Russia and dependent on Russia for the maintenance and operation of its nuclear plants providing the country with electricity (Foley, 2017). While the importing countries are indebted, Russia still owns the power plants, which gives Russia influence beyond just the energy sector and into a country’s foreign policy and security decisions.

Russia’s nuclear power export policy is thus driven by multiple factors. Firstly, the nuclear industry provides an impetus both to the Russian domestic economy and its international prestige. It’s development outside of the conventional fossil fuels gives Russia an opportunity to play into future clean energy market demand of countries willing and able to venture into the nuclear power industry. But Russia’s policy of discounted prices, preferential loans and providing of long-term service and assistance also gives it strengthened global reach and influence in importing countries’ national security. The fact that Russia uses energy and the dependency of its importers as a political tool is well known and the nuclear sector is clearly no different, which is an important factor to take into account by countries deciding to go into business with Rosatom.

On May 16, leader of the UK Labour party Jeremy Corbyn announced his party’s plan to (re)nationalize the UK’s water and energy network. This programme would be carried out in the case of a Labour victory in the UK national elections in 2022. Since…

The LNG industry is subject to continuous developments such as supply growth, global warming and technological advancements.…

Fracking, a method of extracting oil and gas from shale rock formations has undergone considerable developments over the past…